skip to main | skip to sidebar

"New" Zodiac Sign Ophiuchus has Been Around for thousands of Years. 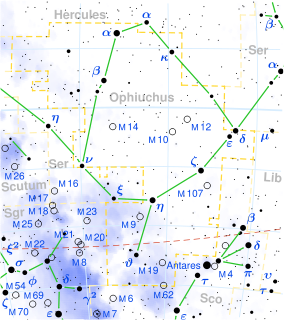 For some reason it was reported recently that a "new sign" has joined the traditional 12 signs of the Zodiac.

This "13th sign", however, has been there for thousands of years. The Sun passes through it once a year as it travels from Scorpio to Sagittarius.

The constellation Ophiuchus may be based on Asclepius, the ancient Greek God of Medicine (in Latin he was called Aesculapius). He learnt the art of healing from Chiron, the Centaur.

On either side of Ophiuchus in the heavens lie the two parts of the sign of the serpent he holds, Serpens Caput, the Serpent's Head and Serpens Cauda, the Serpent's Tail. It is from the Serpent that Ophiuchus learnt the secret of the Elixir of Life.The "rod of Asclepius" consisted of a serpent entwined around a staff. It has been used as a symbol of the medical profession ever since (although it has been confused with the caduceus in modern north America).

Asclepius was the son of Apollo and his mother Coronis. Coronis died before his birth, but Apollo surgically removed the baby carried it to the centaur Chiron who raised Asclepius and instructed him in the art of medicine. Among his children were his daughters Hygieia, Meditrina, and Panacea. The names of his daughters each rather transparently reflect a certain subset of the overall theme of "good health".

Zeus killed Asclepius with a thunderbolt because he raised Hippolytus from the dead and accepted gold for it. Other stories say that Asclepius was killed because after bringing people back from the dead, Hades thought that no more dead spirits would come to the underworld, so he asked his brother Zeus to remove him. 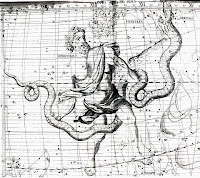 After Asclepius' death, Zeus placed Asclepius among the stars as the constellation Ophiuchus.

The even older Babylonian version of Ophiuchus, however, is slightly different. Here the serpent is Tiamat, the Monster of the Bitter Ocean. Holding Tiamat is Marduk, the Sun God of the Babylonians. They are doing battle together in the eternal fight of good against evil.
Posted by Corey Zak at 5:46 AM No comments:

Flowers Spread Around the World While Dinosaurs Helplessly Watched 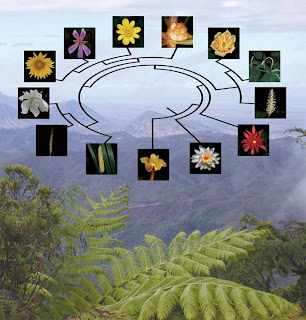 From the ubiquitous daisy to the fantastical orchid, flowering plant species are as diverse as they are numerous. Turns out, these bloomers went through an evolutionary "Big Bang" of sorts some 130 million years ago, a brief era of explosive floral diversification at a time when dinosaurs walked the Earth.

The origin of flowering plants called angiosperms has long baffled scientists, with Charles Darwin famously referring to the plant puzzler as an "abominable mystery."

"One of the reasons why it's been hard to understand evolutionary relationships among the major groups of flowering plants is because they diversified over such a short time frame," said researcher Robert Jansen, professor of integrative biology at the University of Texas at Austin.

Sponges are primitive creatures with a body plan unlike that of any other living organism. They are also our most distant animal cousins. Now that their genetic make-up has finally been sequenced, it could explain one of the greatest mysteries of evolution: how single-celled organisms in the primordial oceans evolved into complex multicellular animals with the spectacular diversity of body plans we see today.

The sponge genome confirms that sponges share much the same genetic tool kit for multicellularity as the rest of the animal kingdom. This means that all the key genetic prerequisites for modern animals made up of trillions of cells were in place well before sponges split from other animals 600 million years ago. What's more, the sponge genome reveals the very ancient origin of genes involved in cancer, which is caused by a derailing of cell replication and is the signature disease of multicellularity.

We had already gained some insights from studies comparing the genomes of single-celled protozoans with those of other primitive animals. But there was a crucial gap, occupied by the sponges. "Sponges really were the last missing piece of this puzzle," says Mansi Srivastava, an evolutionary biologist at the Whitehead Institute in Cambridge, Massachusetts. 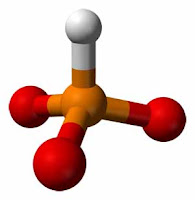 An obscure compound known as pyrophosphite could have been a source of energy that allowed the first life on Earth to form, scientists now say.

From the tiniest bacteria to the complex human body, all living beings require an energy-transporting molecule called ATP to survive. Often likened to a "rechargeable battery," ATP stores chemical energy in a form that can be used by organic matter.

"You need enzymes to make ATP, and you need ATP to make enzymes," said researcher Terence Kee of the University of Leeds in England. "The question is: Where did energy come from before either of these two things existed? We think that the answer may lie in simple molecules, such as pyrophosphate, which is chemically very similar to ATP, but has the potential to transfer energy without enzymes."

The Cambrian Explosion: The "Big Bang" of Animal Life 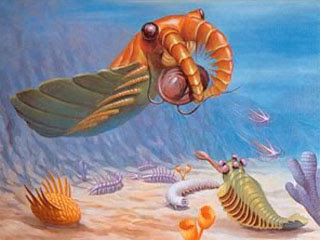 The "Cambrian Explosion" was the relatively rapid appearance, over a period of approximately 10 million years, of most major groups of complex animals around 530 million years ago, as found in the fossil record.

For more than 3 billion years - most of earth's history - all organisms were simple, composed of individual cells occasionally organized into colonies. Starting around 580 million years ago, the rate of evolution  began to accelerate rapidly, and a remarkable amount of biological diversity appeared, culminating in the Cambrian Explosion. Here, the majority of types of modern animals appeared in the fossil record for the first time, as well as unique lineages that subsequently became extinct.

The Cambrian explosion has generated extensive scientific debate. The seemingly rapid appearance of fossils in the “Primordial Strata” was noted as early as the mid 19th century, and Charles Darwin saw it as one of the main objections that could be made against his theory of evolution by natural selection.

The long-running puzzlement about the appearance of the Cambrian animals, seemingly abruptly and from nowhere, centers on three key points: whether there really was a mass diversification of complex organisms over a relatively short period of time during the early Cambrian; what might have caused such rapid change; and what it would imply about the origin and evolution of animals. Interpretation is difficult due to a limited supply of evidence, based mainly on an incomplete fossil record and chemical signatures left in Cambrian rocks.

Wikipedia Article: "Cambrian Explosion"
Posted by Corey Zak at 5:08 AM No comments:

Researchers reconstructing make-up of ancient oceans - News
Posted by Corey Zak at 6:47 AM No comments:

Newly described dinosaur fossils from New Mexico are helping scientists better understand the early development of these ancient creatures. The 6-to-12 foot-long, meat-eating creature, Tawa hallae, is described in Friday's edition of the journal Science.

"Tawa gives us an unprecedented window into early dinosaur evolution, solidifying the relationships of early dinosaurs, revealing how they spread across the globe, and providing new insights into the evolution of their characteristics," Nesbitt said.

"This new dinosaur, Tawa hallae, changes our understanding of the relationships of early dinosaurs, and provides fantastic insight into the evolution of the skeleton of the first carnivorous dinosaurs" co-author Randall Irmis of the Utah Museum of Natural History, said in a statement.